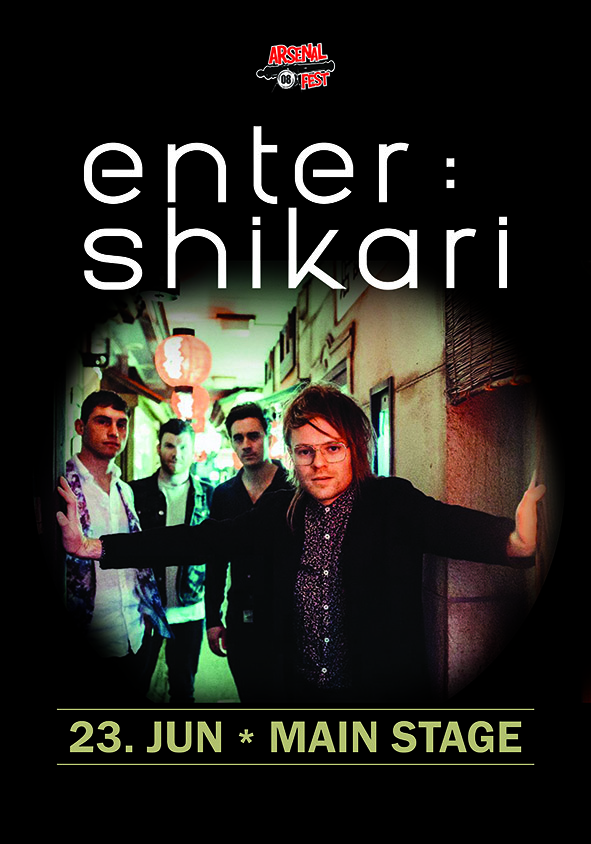 3 maja, 2018 0Comments longplay
British band Enter Shikari, Plavi orkestar and Yu grupa will perform at Arsenal Fest 08 that will be held on 21st, 22nd, 23rd June in Kragujevac. The festival’s lineup will also be empowered by artists such as Disciplina Kitchme, Mortal Combat and Nikola Vranjković.
For the first time, punk-rock-drum n bass band Enter Shikari, will perform at the Main Stage, famous for their hits “Sorry You’re Not a Winner”, “Destabilise”, “Anything Can Happen…”, “Juggernauts”, “Arguing with Thermometers”, “Anesthetists” and “Radiate”.
Plavi orkestar, one of the most popular ex Yu bands will perform at the Main Stage, on the third night. This band, labeled as “the cultural phenomenon of 80s and 90s” has impressive amount of hits, such as “Suada”, “Goodbye Teens”, “Bolje biti pijan”, “Sava tiho teče”, “Zelene su bile oči te”, “Kaja”, “Lovac i košuta”, “Odlazim”, “Ako su to samo bile laži”, “Amerika”… – written by front man Saša Lošić.
After the performance of the trip hop pioneers – Morcheeba, on 23rd of June, the Main Stage will be closed by cult band Disciplina Kičme, whose bassist and front man Dušan Koljić Koja is one of the most authentic and influential figures of the Serbian and regional scene. On the third day Letu štuke from Sarajevo, will play at the Garden Stage.
On June 22, Scottish hitmakers Texas and Balkan gipsy punk metal band Kultur Shock, while be on the Main Stage, while the Garden Stage will host feature metal-punkers Mortal Kombat, known for hard sound and provocative texts, as the ones in songs “Vegan”, “Devedesete”, “Papučar”, “Veliki brat” …
The legendary Yu grupa opens the Main Stage on June 21st, after what Editors, The Kills and Dub Inc will play. Arsenal Fest has a special honor to host the pioneers of the Yugoslav and Serbian rock music – Yu grupa of brothers Jelić, who, since the founding in the 1970s, published a number of anthological albums and songs, such as “Noć je moja”, “Kosovski božuri” Crni leptir “,”Čudna šuma”,”Od zlata jabuka”,” Mornar “…
On Sunday, June 21st, the songwriter Nikola Vranjkovic, who recently released the double CD “Veronautika” is playing at the Garden.
His latest album with its hits such as “Dve reči”, “Večernja zvona”, “Zadrži svoj dah” or “Tajni život suterena” is one of the best-rated albums in former Yugoslavia in the last twenty years.
On the first night, drummer of the legendary band Ramones – Marky Ramone, and provocative Let 3 from Rijeka, will perform at the Garden stage. The other names are about to be announced.
The set of tickets for all three evenings costs 2.500 dinars, and individual tickets cost 1.500 dinars per night. We sell tickets via Eventim network and in Dom Omladine Kragujevac and Pozorište za decu in Kragujevac.
Share: