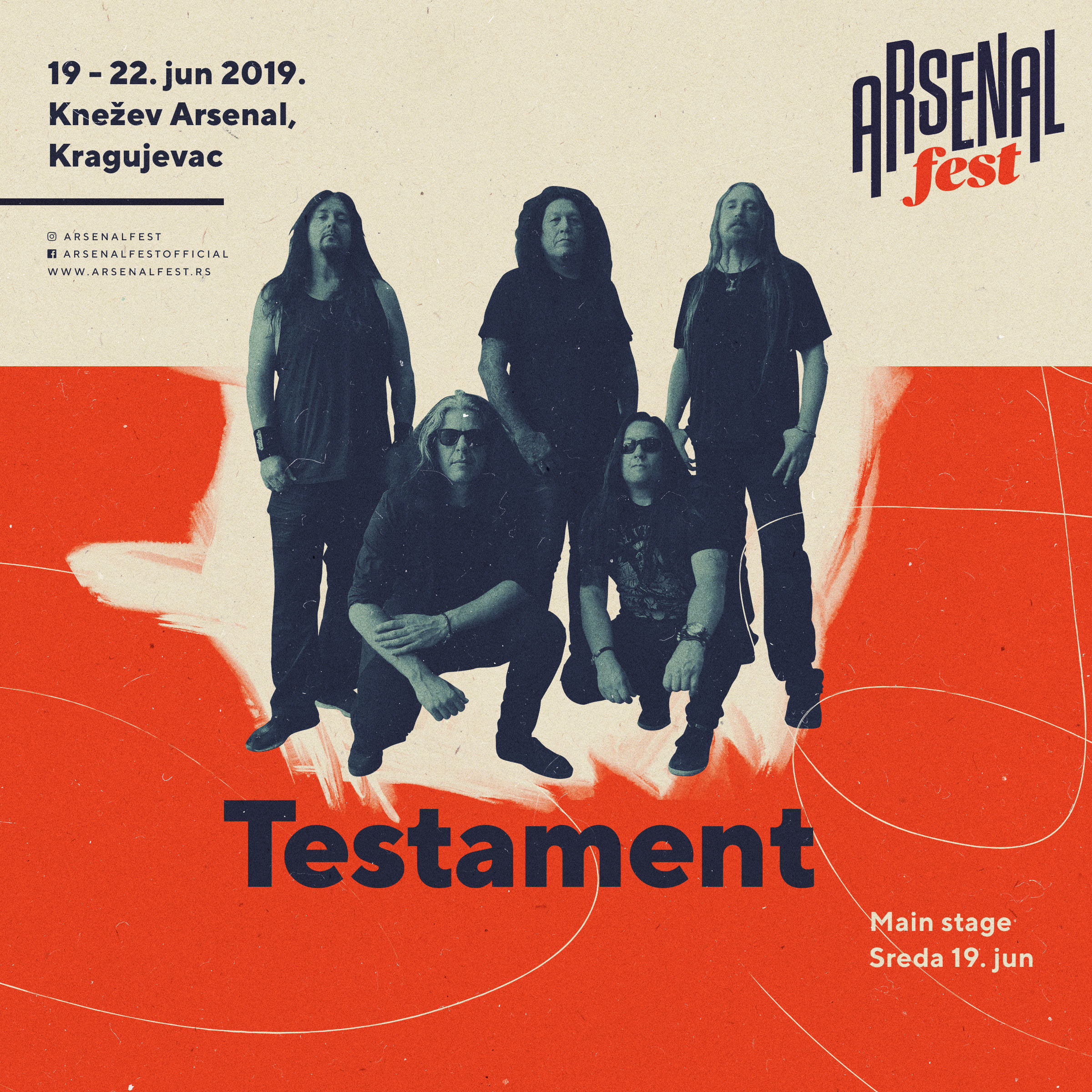 Arsenal 09 will be the first edition of the festival that will last for 4 days (instead of 3 days). Testament, known for its hits such as: More Than Meets The Eye, Native Blood, Return to Serenity, The Pale King, will perform on the first night, June 19, on Main Stage.

On day ticket is just 1000 dinars. The 4-day-ticket costs only 2300 dinars during New Year’s pre-sale, that begins on December 7 and lasts until 31 December. The tickets are available via www.tickets.rs ventim, while in Kragujevac they can be found in Dom omladine Kragujevac, in Dečije pozorište and in Da Gama travel (Višnjićeva 3).

The forbearers of thrash resemble a Lovecraftian brotherhood. They’re the elder gods who set everything in motion for generations to imitate, while still ruling the roost from on high. TESTAMENT stand proudly among the same vanguard that boasted “The Big 4” and beyond.

For over three decades, the Bay Area quintet – ChuckBilly (vocals), EricPeterson (guitars), AlexSkolnick (guitars), SteveDiGiorgio (bass), and GeneHoglan (drums) – has consistently delivered unadulterated, unbridled, and unbreakable metal in its purest form without compromise or any signs of slowing down. Over the course of seminal releases ranging from »The Legacy« and »Practice What You Preach« to »The Gathering« and »The Formation Of Damnation«, which won “Best Album” at Metal Hammer’s 2008 Golden Gods Awards, the group’s sales exceeded 14 million worldwide with 2 million in the U.S. alone. Most recently, 2012’s critically praised »Dark Roots Of Earth« assaulted the charts, moving over 20,000 first-week copies and seizing #12 on the Billboard Top 200, the band’s highest U.S. chart bow ever. However, in 2016, TESTAMENT return with more teeth than ever on »Brotherhood Of The Snake« (Nuclear Blast).

“The first record is always classic because you form the band, you’re totally into it, you go through the club scene, find yourself, and write your initial album over multiple years,” explains Eric. “Then, you get signed and end up in a cycle. We took some time to do »Brotherhood Of The Snake«, and it shows. Different influences came in. Normally, there are a few straight ahead thrash songs. We haven’t had this many thrash tracks since »The Legacy«. It’s a new era.”

Arsenal Fest is traditionally held at the end of June in Kragujevac – Main Stage is located in the “Knežev arsenal”, a fantastic outdoor space inside 19th century ammunition factory, nearby is Garden Stage in “Zastava Garden” covered with trees, while Explosive DJ Stage is located in “Čaurnica”, a rustic building where TV series “Titanic” was filmed a year ago.